It’s been a ram-packed four days (plus travel), but well worthwhile. EGX 2016 was the first event of its kind that I’ve been to but, much like Agatha Christie’s birthday celebrations, I’m already looking forward to the next one. I pretty much just caught the train up to Birmingham and stayed in the cheapest hostel I could find, which turned out to be a decent enough plan since plenty of other people had had the same idea. I spent most of my evenings hanging around with other EGX people, though the first night I was there I ended up grabbing a burger with Markus Stitz, who was heading to the same venue for a different reason: it turns out that EGX overlapped exactly with the Birmingham Cycle Show, and he was there to display the bike he used to cycle around the world. I definitely recommend checking out the video on his site – the distances he covered on not just one bike but one gear are simply extraordinary – but I also recommend getting out there and not just going for the nearest hotel next time you’re headed off to something like this. You meet people, you learn things, and your entire stay costs the same as one night in a Travelodge. That’s a definite plus point.

I actually managed to snag the very last EGX early access ticket going on the website a few months back, which turned out to be well worthwhile because it meant that I could get into the venue at 10am each day when the bulk of visitors were getting in at 11. That typically made for a chance to queue up for one huge thing for half an hour or so when it would have taken more like two hours at any other point during the day. If I’d had to wait that long to try Final Fantasy XV, Battlezone, or Gears of War 4, I probably wouldn’t have bothered. I might have stuck it out for Dishonored 2 just because the first game was so spectacularly well constructed, but for the most part a wait of more than an hour would have felt like time that would have been better spent trying out some of the excellent indie games on offer.

For much the same reason, I feel as though it’s worth focusing on the indies here. Everything I queued up for was well worthwhile – and sure enough, Dishonored 2 looks to be every bit as interesting as its predecessor – but given that people are already eagerly awaiting those huge titles, I think it makes more sense to draw attention to those that aren’t so huge and that people might not yet have heard of. So, in no particular order: 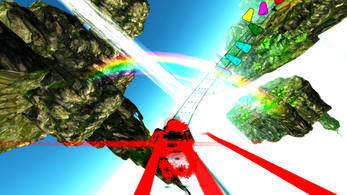 Okay, I say “no particular order” but I’m sticking Flight of Light up here nice and early because it’s currently on Kickstarter and the campaign ends first thing on October 1st. Essentially it’s a racing game with rhythm mechanics: notes appear on the track in time to the music, and hitting them with your ship provides a speed boost. If funded it’ll be out on Wii U, PS4 and PC, and makes great use of motion control (I tried it with a wiimote) and local multiplayer. There’s a demo available through the Kickstarter page if you’re curious.

Oh My Godheads! is probably the most flat-out entertaining thing I played at EGX. Imagine a game of American football, only the ball is the giant, living, apparently-quite-angry head of a stone idol, slaughtering other players with swords and exploding pies is a legitimate tactical move, and the game takes place in some kind of lost temple. It’s ludicrously good fun, while being incredibly simple to pick up and play. Everything is balanced to perfection, resulting in a game of non-stop mayhem that at the same time doesn’t feel too chaotic to understand. Simple tricks emerge quite quickly – killing off opposing players when they respawn, and learning to throw the head just before you get killed off yourself – but it takes some skill to really make the most of them. The heads themselves shake things up somewhat as each have different powers: one might explode when held too long, while another might reverse the controls at random.

A Normal Lost Phone is one of the games I was curious about before I even set off for EGX, having seen it advertised on the website. There’s a demo available online, and right off the bat it reminded me a lot of the excellent Gone Home. Though the whole game takes place on a virtual phone screen (or a real phone screen, if you’re playing it on your mobile), the process of exploring one app or message thread in order to unlock another feels very familiar, with each new discovery unlocking not only new mysteries to unfold, but a better understanding of the people behind the names in the phone’s list of contacts. It’s well written, too: I was particularly pleased to discover that Dad signs his texts “Dad.” The whole thing feels very well observed.

Foramina is a promising-looking puzzle game that’s apparently quite early in development: I believe it’s been going for about a month or so. Nevertheless, the animation and illustrations look fantastic, and the brief playable demo strikes a neat balance. It’s far from obvious what you have to do or why, but the nature of the game – relying contextual actions rather than the more common point and click style – limits the time it takes to push through using a trial and error approach.

I made an effort to try as many virtual reality games as I could while I was at EGX just because I don’t intend to buy a VR headset myself any time in the forseeable future. Whether or not VR will really take off and why is a topic for a dozen or so other blog posts, none of which I’m particularly eager to write myself, but one thing that’s always struck me as a little disappointing is how many VR games seem to use the headset as a big screen and the controller as a gun. They’re immersive, sure, and technologically impressive, but not really groundbreaking in any meaningful way.

Craft Keep VR is entirely unlike those games. Using the HTC Vive hardware, it allows you to walk around your very own Fantasy RPG shop making weapons, mixing potions and placing orders for the raw materials to make those things. You know that nameless guy in Final Fantasy who sells you swords and potions? You’re that guy! It’s remarkably intuitive (though watching other players’ blunders from the queue certainly helps avoid the most common pitfalls): once you learn the basic “controls” – how to pick up objects (squeeze the controllers) and activate them (pull the trigger) – most tasks become second nature.

You know how I said that a whole lot of VR games are basically just a gun and a big screen? That’s actually what makes Serious Sam VR so entertaining. You get a minigun – an actual, spinning-barrels minigun – to hose swarms of enemies with bullets. They also had one of the booths set up as a greenscreen so you could see players “in” the game: it’s a neat feature, though evidently none of this was ever intended to make it into living rooms. Gameplay-wise, though, it’s nicely balanced and uses the VR equipment well. Getting through the game (which I personally never managed!) involves looking around to make sure nothing is creeping up on you from the sides, as well as keeping the minigun trained on some of the larger enemies while you do so.

The only game on this list I didn’t personally play, Gang Beasts is another work of local multiplayer mayhem. I include it here solely because I got watching some of the Twitch streamers playing it at the event, and it was laugh-out-loud hilarious the entire time. It’s basically colourful, chubby little characters in animal costumes grappling and punching each other non-stop, frequently on, say, a series of trapdoors where giant sausages periodically fall from the sky. The only reason I didn’t actually get my hands on the controls myself was that there was a massive crowd of people around the game every time I went by. I don’t especially feel like I missed out, though: it’s great fun to watch!

So that’s basically it. There’s a lot more I could cover about EGX in general – I saw some hugely ambitious costumes while I was there, and learned a whole lot about game development – but it’s mostly the kind of thing that either you had to be there for or will work its way into other games-related posts. If I covered every single thing I saw while I was there, this writeup would be massive. It’s already been a struggle to whittle it down, and I’ve yet to catch up on all the things I let slide while I was away.

Chief among those, by the way, is Ten Little Astronauts, the sci-fi murder mystery I had accepted for publication a couple of months back. My publisher, Unbound, are crowdfunding it, and if it hits 25% of its goal in September (tantalisingly close!) I’ll be releasing an additional reward immediately. Time’s running out, though, so if you’re planning to pledge then make it quick!