I got a chance to show Bananarchy at a game developers’ event in Southampton last night, and as you might expect its fruit-based control scheme attracted a fair bit of attention. 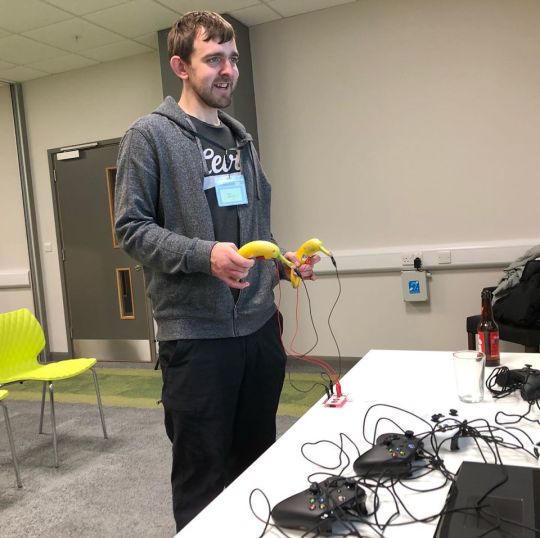 Later on in the evening I did a quick interview with Voice FM, which you should be able to catch sometime around 7pm tonight. You can tune in on 103.9 FM if you’re in the area, or use the “listen live” option online if you’re farther afield. At least a couple of other games people I know were also interviewed, so it should be well worth watching out for!

EDIT: The programme is now available on Catch Up through this link. My interview begins at 1:34:00, but do have a listen to the other developers featured in the second hour: they’re working on some fantastic things!

A while ago I did an interview with Seoirse Dunbar of the Adventure Games Podcast, and you can now listen to it here!

If you haven’t already been following my interactive fiction, this should be a really good introduction to it. Even if you have, there’s still some new stuff including plans for a sequel to Blacklight 1995. It also touches upon Ten Little Astronauts pretty heavily, so there’s something for everyone!

The podcast can also be found on iTunes, Spotify and PodBean, among other platforms.

I’ll be at Waterstones in Winchester (the High Street one) 6pm on June 10th to talk about Ten Little Astronauts.

If you missed the launch last month, this is the perfect opportunity to stop by and celebrate the publication of the book! Tickets are just £2.00 and refreshments will be served.

Do feel free to come along even if you did make it to the launch too! This event is organised as a sort of interview, so it’s likely to be a little different to the last one. 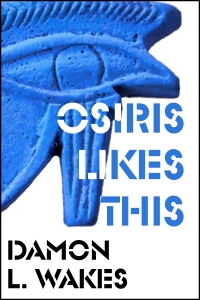 Damon L. Weeks sounds like an interesting guy indeed, and I’d very much like to meet him someday. Just kidding: there’s probably some way for CJ Petterson of Lyrical Pens to fix that name-related slip-up, but it’s amusing enough that I’m happy for it to stay. This one’s a Q&A that’ll probably make for a neat introduction to my work if you’ve only just discovered it, but even if you’ve been following me for a while I hope you’ll find out some interesting new bits and pieces.

If you’ve already discovered Ten Little Astronauts, this excerpt on Christina Philippou’s blog will probably be familiar to you already: it’s “Eleven,” the opening section of my sci-fi murder mystery novella, and you can also find it on the publisher’s website. However, unlike that page over on Unbound, this guest post reveals why the book doesn’t start with Chapter One.

If you didn’t catch the guest posts here on my own blog first time around, here they are again:

These aren’t the sort of thing you’ll usually see from me (poetry advice especially!) so do have a look if any of them catch your eye: it’s very much a chance to explore something new. Also, if you’re interested in mysteries or thrillers – and if you’re here then I feel as though there’s a good chance you are – do keep an eye out for more good stuff during Mystery Thriller Week: it all gets started on February 12th, and I’ll be running a live hour starting 4pm EST on the 15th! I hope to see you there!

Another guest post today, this one a Q&A with Miriam A Averna. No Cure For Fear was one of the books that caught my attention early on the Mystery Thriller Week website (largely due to the cover, partly because I’m currently quite interested in mysteries involving drugs), so it’s great to have her on my very own blog!

Miriam A. Averna is the author of No Cure for Fear. A gritty, medical thriller that asks the question: can anyone be truly altruistic?

Eddy Miller, a local graffiti artist and cocaine dealer, has only one goal – to save enough money for his terminally ill sister’s care. When a blast from his past, Ralph, makes him an offer he can’t refuse, he ignores his gut feeling and takes on a dubious medical trial. This, in exchange for a chance to keep all the profits from the sale of a synthetic type of cocaine. But when things start going wrong, will Eddy care enough to put a stop to the trial? And what really lies behind the secretive medical firm producing these drugs? END_OF_DOCUMENT_TOKEN_TO_BE_REPLACED