Unbound has opened up a special Christmas Shop of books and bundles that would make good festive gifts, and Ten Little Astronauts is among them! This bundle would be perfect for anybody you know who loves sci-fi so much they’d definitely get through more than one book before New Year. 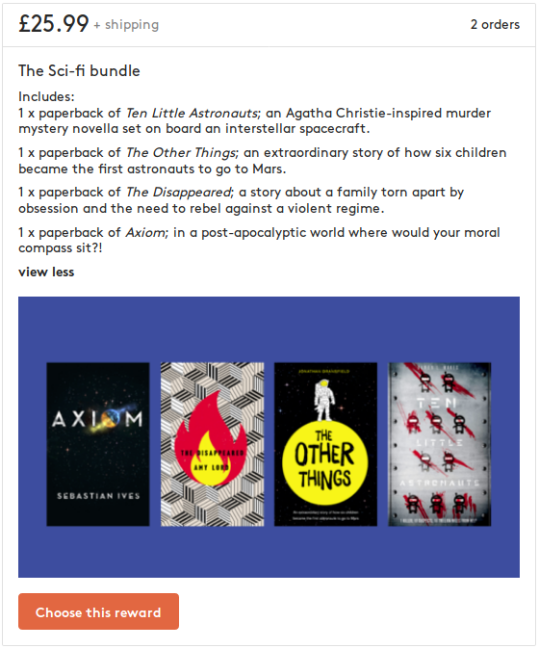 This is currently the second most ordered bundle, which I realise isn’t saying much as the shop has only just opened and most have yet to see any orders at all, but still seems like a pretty promising start. Most books have an RRP of around £10, so four for £25.99 is a bit of a bargain. Also, if you order before the 17th of December (from within the UK) the bundle should arrive in time for Christmas.

Even if you’re not shopping for sci-fi, do check out the full selection of books and bundles: there’s quite a range on offer!

UPDATE: As the Humble Weekly Bundle is only ever available for a week, the links to it here will no longer work properly. Anything that originally pointed to the bundle in which Spoiler Alert appeared will instead point to the current weekly bundle. Chances are there’s some good stuff in there, but it won’t be the same stuff I’ve described below.

And it’s in good company!

I’ve been putting off sharing a lot of interesting things just because I won’t be able to do much with them until I hand my 20,000 word final project in at the end of the month. However, this is something I think it’s well worth passing on now.

For anyone not already sick of hearing about it from me, Spoiler Alert is a platforming game played entirely backwards: You un-collect coins! You refill the health bars of fallen bosses! You sprint backwards right-to-left through a cartoon landscape while rain falls up!

Oh, and did I mention that you’re an anthropomorphic chilli pepper wearing a bucket helmet? Because that’s kind of important.

If that sounds like the kind of bizarre thing you’d get from me during Flash Fiction Month, then I’m afraid that’s mostly down to coincidence. Though I did have a hand in it, the game was already in great shape by the time I got involved.

His gaze will haunt your soul.

So that’s the first part of this post’s title covered. The second part is the Humble Bundle. This thing is both a great idea, and a great deal: it’s a name-your-price bundle of games with whatever amount you decide being split between the game developers, the guys organising the bundle, and a deserving charity (you decide who gets how much). You could get Spoiler Alert and four other games for a dollar if you wanted to. Spoiler Alert on its own is typically about £2 (or £5 if you’re after the collector’s edition, which is what you get here), so if you want to try it, now’s the time.

However, I’d recommend sinking in a little more. The Humble Bundle typically offers additional games if you pay more than the average price offered at that point, though at the time of writing the big bunch of games is being offered at a steady $6. That’s not a bad offer given that it includes a Professional license for GameMaker Studio, which would ordinarily cost $149.99. Also the source code for Spoiler Alert itself.

If you really want to splash out, $12 gets you the Android export module for GameMaker (ordinarily $299.99). However, that bundle tier is almost all GameMaker-related, so if that’s not something you’re interested in then a $287.99 saving could still end up being a waste of $11. Personally I’ve gone for the $12 option, since I’d love to be able to put out a couple of mobile games even if they’re no more ambitious than Blacklight 1995 or Rainbow Bears’ Playtime.

So just to sum up, Spoiler Alert is in this week’s Humble Bundle, and it’s possibly the best bundle I’ve ever seen. I know with downloadable games that the chore of setting up an account to buy them can be more of a put-off than the money itself (perhaps especially when it’s such a trivial amount) but the Humble Bundle is well worth keeping an eye on.

Disclaimer: I’m plugging Spoiler Alert because I played a small part in making it and want to see it reach more people. However, that part was small enough that I don’t get any royalties or anything. I have absolutely nothing to do with GameMaker Studio or the Humble Bundle whatsoever. (I just think they’re neat.)