The following was an entry for the Hampshire Writers’ Society’s December 2016 competition – “introduce a new comics character” – in which it took 3rd place. You’ll find the judge’s response at the end of the post. 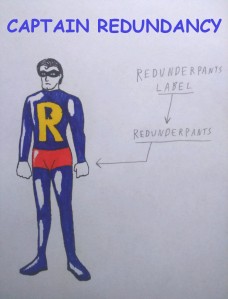 Mild mannered jobseeker John Johnson by day, by night Capt. Captain “Redundancy” Redundancy is a superhero whose superpower is redundancy! Wherever there is crime and somebody is already dealing with it, Captain Redundancy will be there, his sidekick Tautology Boy by his side.

A dark and brooding figurehead of justice, Captain Redundancy spends his nights staring out over the city he is sworn to stare out over. As a symbol of his calling as a hero, he wears a pair of underpants over his tights in addition to the usual pair worn underneath. The outer pair are redunderpants. They are red. Captain Redundancy wears red redunderpants.

John Johnson gained his powers after a bite from a radioactive mosquito caused him to stumble into the path of a chemical truck full of vacuum cleaner cleaner. Following this workplace accident—which granted him the incredible powers of redundancy—he was made redundant. Having accepted Tautology Boy as his sidekick, Captain Redundancy’s sidekick became Tautology Boy. Tautology Boy’s powers of tautology are a natural and direct consequence of being Tautology Boy, whose power is tautology.

Villains across the city fear Captain Redundancy, for by the time they see him it is already too late: the arrival of his dreaded carmobile guarantees that some other superhero has doubtless foiled their plans already. Captain Redundancy will never respond to a crime unless his presence is completely redundant, and thus—in doing pretty much nothing of any consequence himself—he is a beacon of hope in dark times: not the hero the city needs, but the hero it doesn’t.

Also Tautology Boy is there too.

Catherine Wild: It has not gone unnoticed that this submission seeks to parody the comic hero concept and indeed this competition itself, which I found to be quite refreshing. That said, the character is effective, as is his side kick Tautology Boy. The submission itself is very dry and errs on the side of metafiction.